We have always believed and invested in the potential of gene therapy, and this cutting-edge treatment model has already given numerous patients from all over the world a new chance at life.

In 1990 therapy appeared to be a futuristic idea that was almost impossible to implement. In a joint venture with San Raffaele Hospital, Fondazione Telethon decided to gamble on this innovative technique, by dedicating an entire institute to it – the SR-Tiget in Milan. The wisdom of this intuition and the funded research paid off with extraordinary results – gene therapy is now saving the lives of children from all over the world who are suffering from very serious conditions.

Considered the most well-known of all the advanced, precision therapies, the aim of this treatment is to provide the organism with the correct copy of a faulty gene, or another gene that can compensate for its malfunction. The condition is therefore treated directly in the cells of the patient.

This model can be applied to many genetic conditions which are rare, due to mutations in one or a few genes, and where mutation causes a loss of functionality.  However, the potential for gene therapy is enormous, and can be extended to cancer, autoimmune disorders and infectious diseases.

Therapeutic genes are generally inserted into the cells of patients using viral vectors i.e. viruses stripped of their content and made harmless, and then transformed into carriers of therapeutic genetic material. Various types of viruses are used depending on the organ being targeted.

Of significant importance is the case of HIV, the virus responsible for AIDS which was manipulated and turned into a treatment tool by Luigi Naldini, director at SR-Tiget, and has already been shown to work for serious genetic conditions, such as Wiskott-Aldrich syndrome, metachromatic leukodystrophy, beta thalassemia, and mucopolysaccharidosis type 1. Other viruses frequently used in gene therapy include the adeno-associated virus (AAV). Thanks to the work of Tigem they are currently being clinically tested for mucopolysaccharidosis type 6.

As a result of an important partnership with the pharmaceutical industry, in 2016 the gene therapy developed by SR-Tiget researchers for a rare immune deficiency disorder, ADA-SCID, became a drug called Strimvelis available to patients throughout the world. 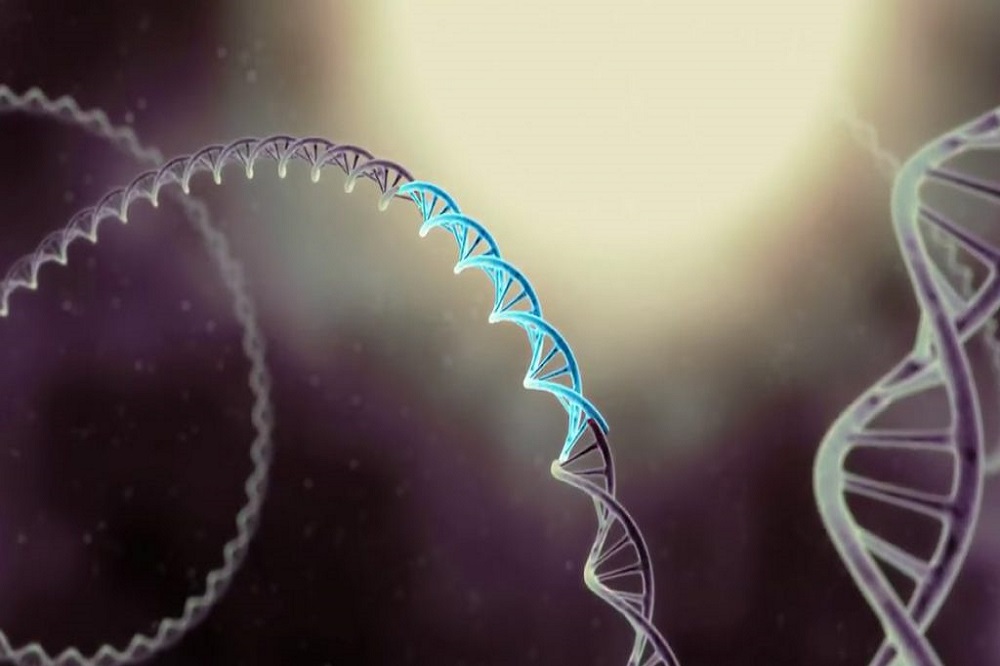 Genetic engineering transpired thanks to recombinant DNA technology, recognised with the Nobel prize in subsequent years. For the first time it was demonstrated that a virus could be used to transfer the correct version of a faulty gene into human cells, synthesising the missing protein – the basic concept of gene therapy was established.

Two years later, in an open letter published in the magazine Science, the scientific community introduced the idea of using gene therapy to treat human conditions for the first time. The idea however was not to make half-cocked attempts, but to study the basic mechanisms in depth. 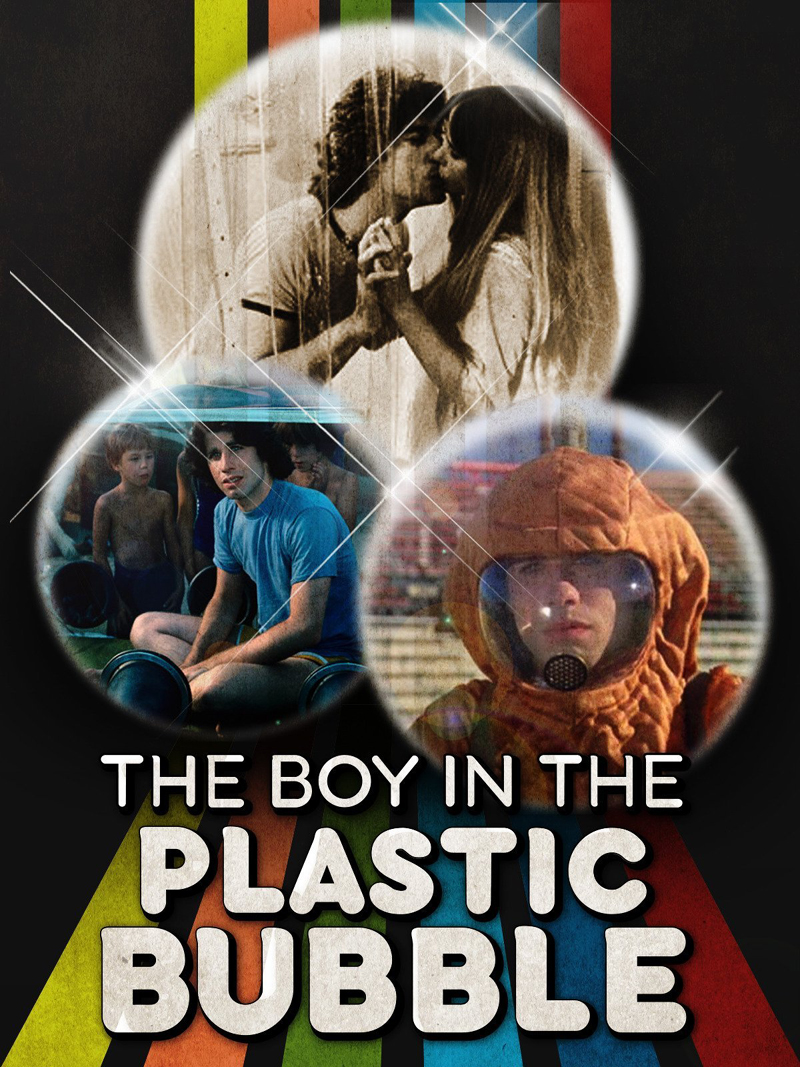 Immunodeficiency at the fore

The Boy in the Plastic Bubble came out in the cinema, featuring John Travolta who played a young man suffering from a rare immunodeficiency disorder which forced him to live in a bubble. The story was inspired by the life of David Vetter, a sufferer of X-SCID, and contributed enormously to making the wider public aware of these conditions. David died in 1984 as a result of complications following a bone marrow transplant, the only hope for a cure at the time. Retroviruses were among the first viruses manipulated to become vectors for gene therapy. A peculiar characteristic of these viruses, of particular interest for the purpose of gene therapy, is their ability to permanently integrate their characteristics with those of the host cell. A retrovirus was the very starting point in subsequent years for the development of viral vectors for the treatment of ADA-SCID, which was refined by SR-Tiget researchers. The first treatment in the world using gene therapy involved a 5-year-old girl suffering from ADA-SCID, Ashanti da Silva. The T lymphocytes and not the stem cells were collected, enabling the child to receive considerably less enzyme therapy, and finally have a normal life. After 4 months another little girl, Cindy Kisik, received the same treatment. Both are still alive today. In that same year in Italy, RAI broadcast the first televised Telethon marathon, sanctioning the creation of the first Italian charity dedicated to rare genetic conditions.

The courageous investment of Fondazione Telethon

5 years after it was established, Fondazione Telethon decided to invest in gene therapy, which offered the possibility of correcting DNA errors responsible for serious genetic conditions. This resulted in the creation of the San Raffaele-Telethon Institute for Gene Therapy (SR-Tiget) in Milan, under the management of Claudio Bordignon. 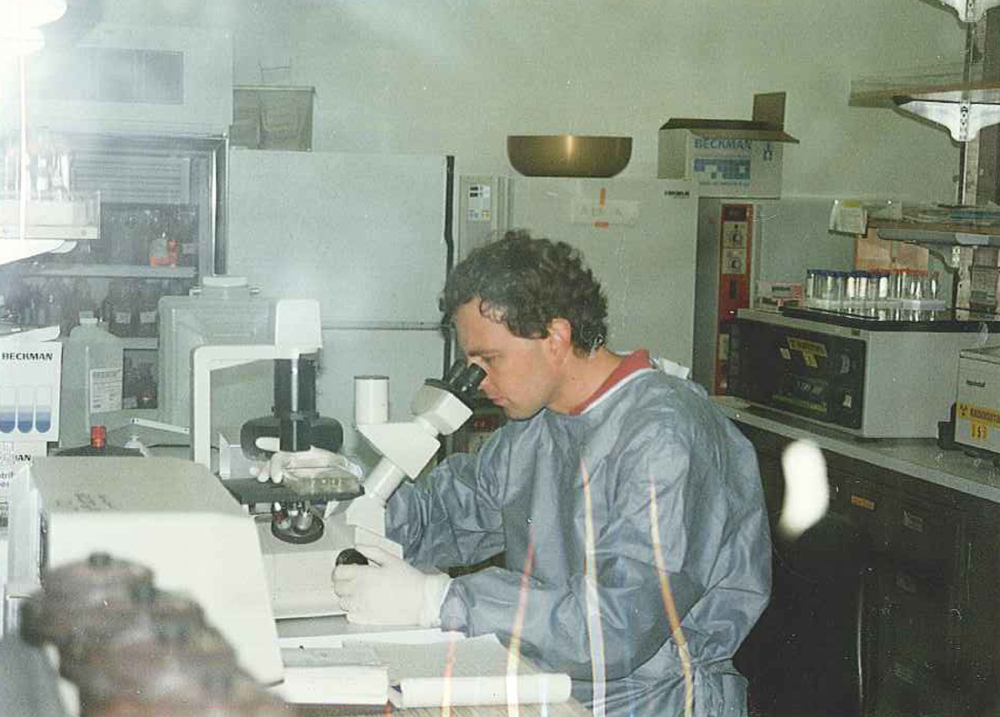 An idea from a young Italian scientist in the USA

After two years of work, a scientist from Turin working in the United States, Luigi Naldini, demonstrated that the HIV virus, known for just over a decade as being responsible for AIDS, could be used as a vector to transport genetic material into cells that do not replicate, such as nerve cells.  As a result a new class of vectors was established – lentiviral vectors – which promised to be very effective for gene therapy.
Other vectors that were studied in that period and shown to be very useful for gene therapy include the adeno-associated virus (AAV) vectors. Hope and fear in gene therapy

While in Pennsylvania a patient with a rare liver condition died after undergoing experimental gene therapy, the first results arrived for a rare hereditary immunodeficiency disorder – ADA-SCID. For the first time at SR-Tiget, stem cells from bone marrow were administered to a little girl from Palestine, Salsabil. The vectors used were derived from a retrovirus, but the use of adenoviral vectors in other genetic conditions continue to be studied. 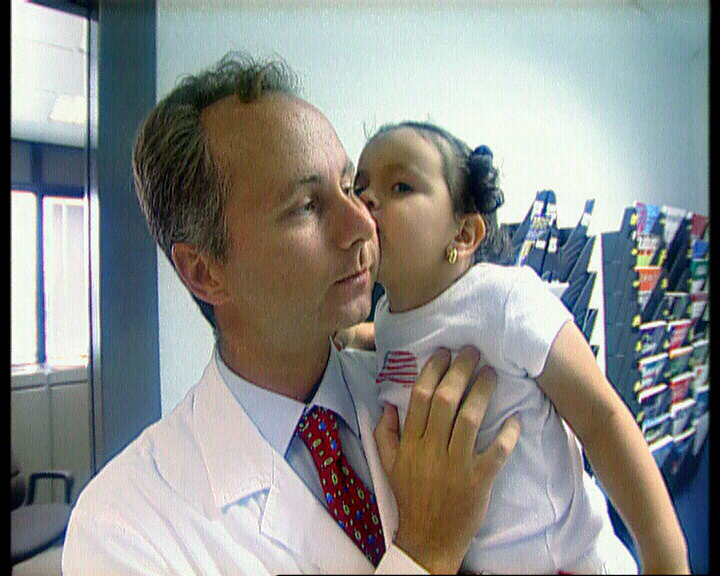 Travelling towards life from all corners of the globe

The researchers from SR-Tiget announced in Science that they had been successful in treating ADA-SCID in two little girls, Salsabil from Palestine and Valentina from Columbia (in the photo with Alessandro Aiuti). Unlike previously, the procedure involved ex vivo treatment hematopoietic stem cells taken from the patients and reinfused after correction with the vector (a retrovirus in this case). Other children from all over the world were involved in this pioneering study.

A French study demonstrated the effectiveness of ex vivo gene therapy with retroviral vectors in patients suffering from another immunodeficiency disorder, X-SCID, which affected David Vetter. However, unfortunately some of the patients involved developed leukaemia. The problem was the insertion point for the new genetic material, which disrupted the control of cellular growth and facilitated malignant transformation. Nevertheless, the French case led to the in-depth study of the mechanisms by which viral vectors integrate in the DNA of the host cell. A fully-fledged line of research for the development of safer vectors was created.

In the meantime, Luigi Naldini moved to Milan and became the co-director of SR-Tiget along with Maria Grazia Roncarolo. Laboratory research continued on using the new lentiviral vectors on other conditions – metachromatic leukodystrophy (MLD) and Wiskott-Aldrick Syndrome (WAS), an immunodeficiency disorder. 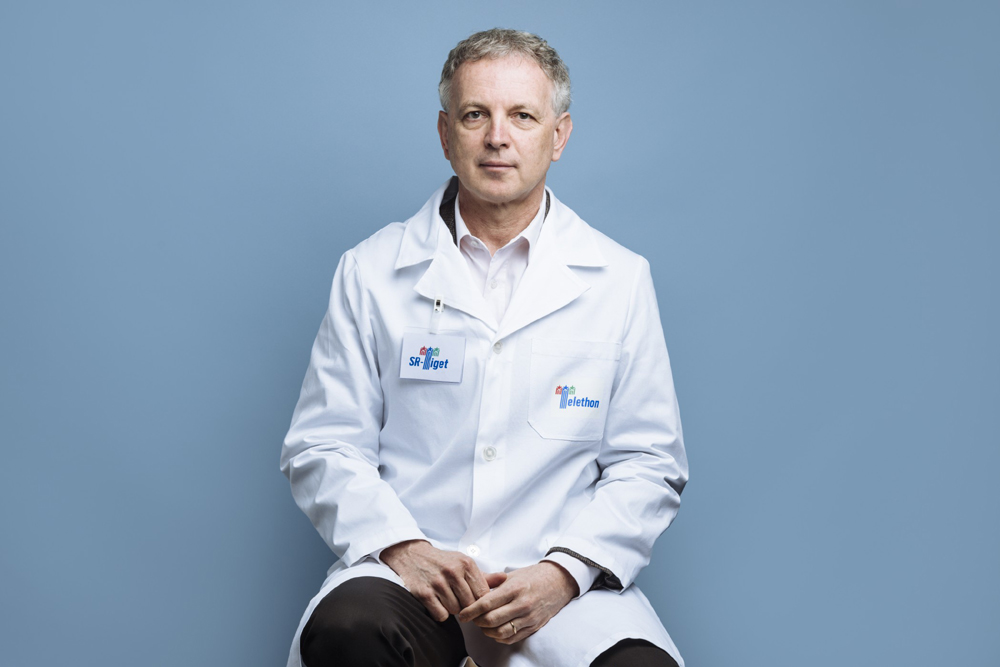 It was demonstrated that gene therapy with lentiviral vectors is also effective for Wiskott-Aldrich Syndrome, a serious immunodeficiency disorder of genetic origin. Eugenio Montini and Luigi Naldini demonstrated in Nature Biotechnology that the vectors were safer than first-generation vectors, even though they are derived from a virus which is very much feared – HIV. 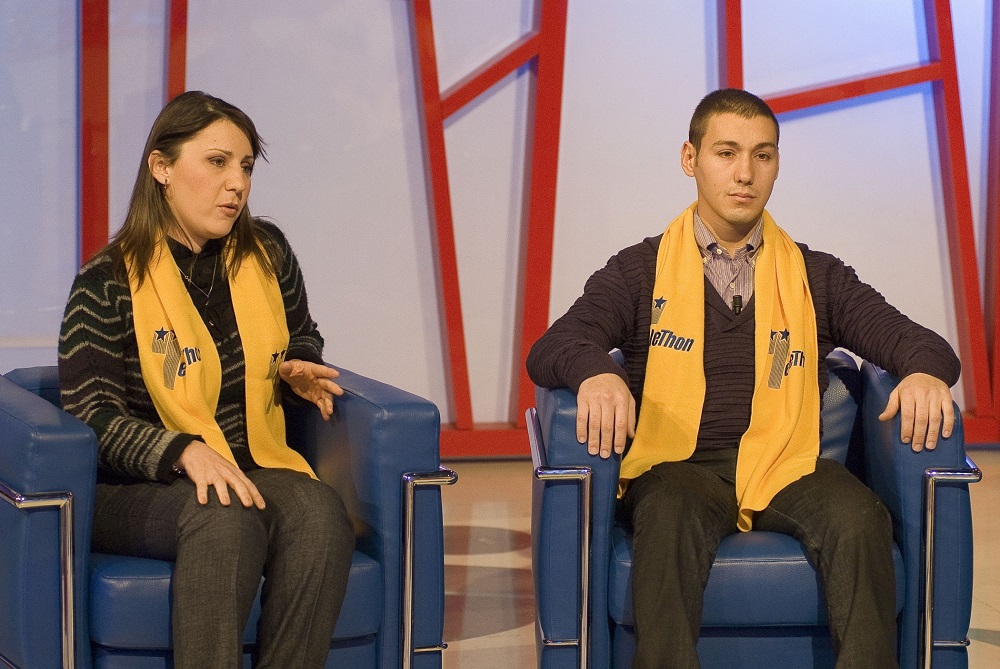 Gene therapy for a rare form of blindness

An American study, in which researchers from Tigem in Naples also participated, demonstrated for the first time the effectiveness of gene therapy with AAV vectors for the rare form of inherited blindness, Leber congenital amaurosis. Two Italian siblings, Tommaso and Josalinda (in the photo during the Telethon Marathon), were among the first to receive the treatment. In the prestigious New England Journal of Medicine, Alessandro Aiuti and the other researchers at SR-Tiget confirmed that gene therapy for ADA-SCID was effective and reliable, even in the long term. All the children who had been treated up until that point were still well and leading a normal life. Furthermore, a French study demonstrated the effectiveness of gene therapy with lentiviral vectors in patients suffering from adrenoleukodystrophy, a serious genetic disorder of the nervous system made famous by the film Lorenzo’s Oil. 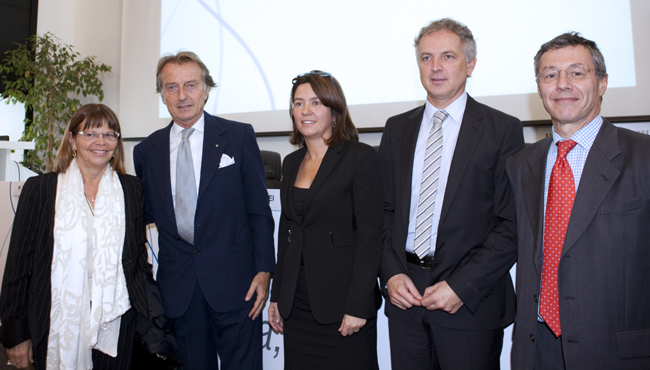 While the regulatory bodies were approving testing with the new vectors on patients with metachromatic leukodystrophy and Wiskott-Aldrick Syndrome, Fondazione Telethon and San Raffaele were signing an important agreement with GlaxoSmithKline. Gene therapy for ADA-SCID would be available to everyone, in addition to therapies for another six rare genetic conditions, once shown to be safe and effective (the photo shows the Fondazione Telethon chairman, Luca di Montezemolo, the general manager Francesca Pasinelli, and the SR-Tiget director, Luigi Naldini). 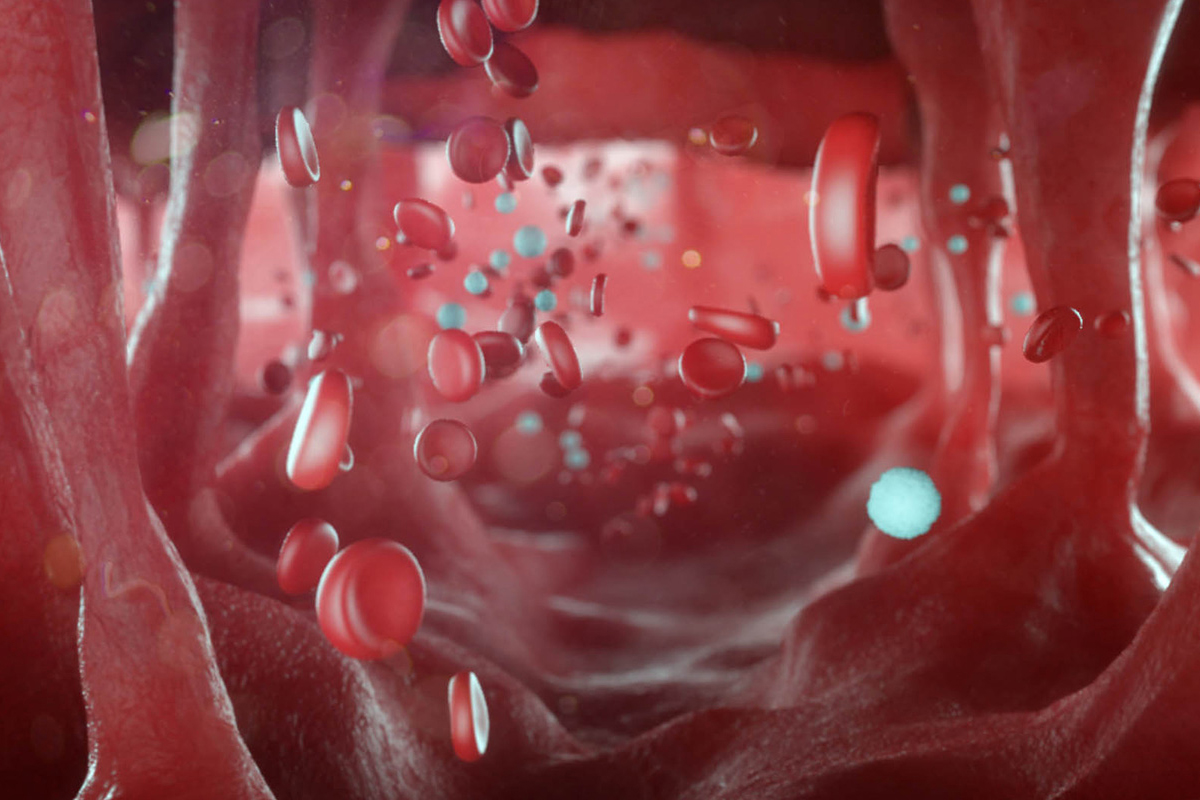 Good news for other conditions

An American study demonstrated the success of gene therapy with AAV-8 vectors in patients with haemophilia B. Furthermore, gene therapy started to produce significant clinical results in treating tumours, especially leukaemia and lymphoma, thanks to the engineering of T cells of the immune system, which are armed against the cancerous cells.

The very first gene therapy, Glybera, was approved in Europe to treat a rare liver disorder. In the meantime, a technique appeared on the scene that would be the protagonist of research in subsequent years – CRISPR/Cas9 gene editing. It  was used for the first time to introduce targeted modifications to the DNA in mammalian cells. This precise and easy-to-use method proved to be of significant interest to the scientific community, who started to study it throughout the world.

In July, 15 years after Naldini’s initial work, the SR-Tiget researchers published two studies in Science showing that gene therapy with lentiviral vectors was safe and effective on the first six patients treated, who were suffering from metachromatic leukodystrophy and Wiskott-Aldrick Syndrome. This news resonated all over the world, among the scientific community and the general media. 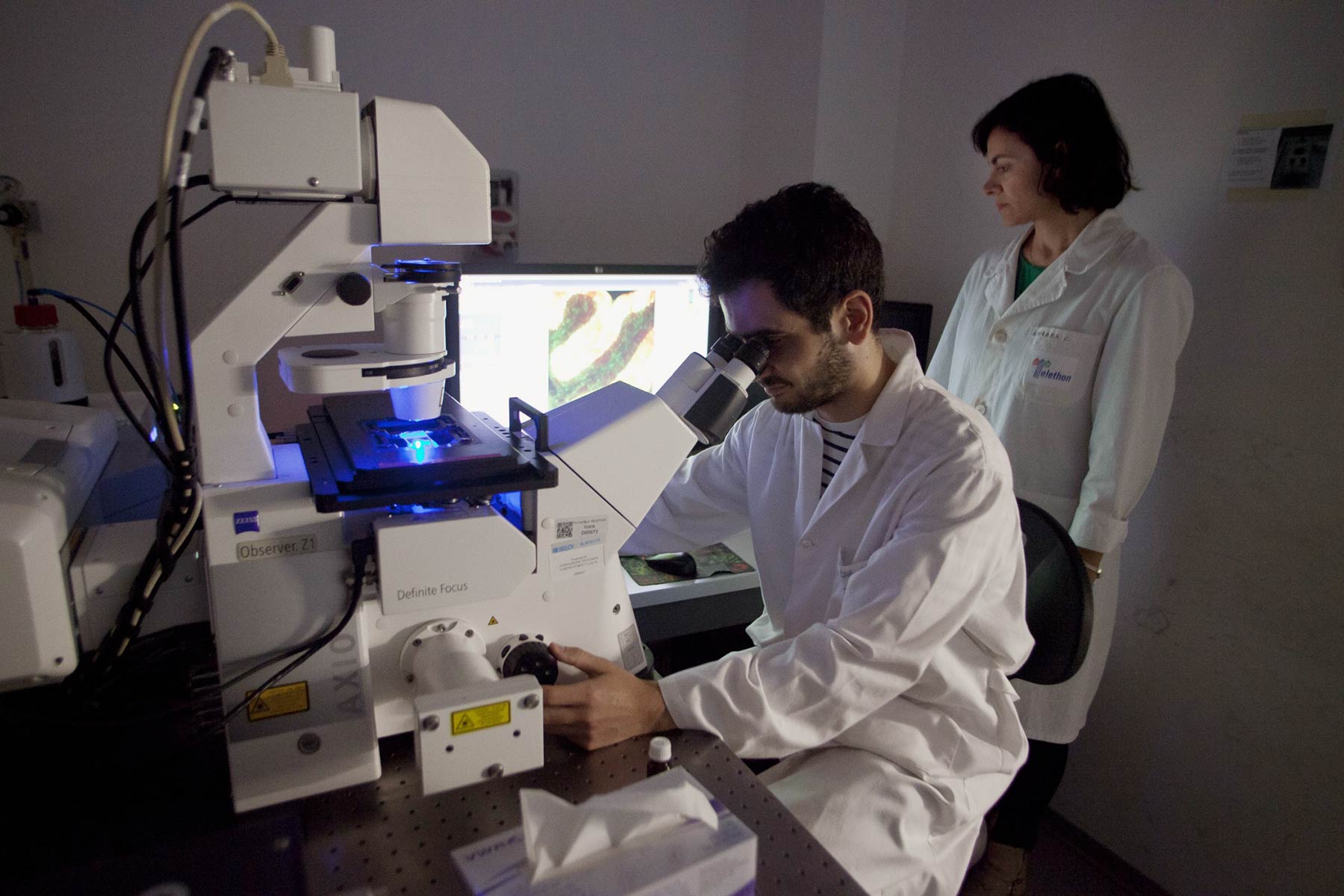 The first use of human gene editing

The first clinical study in the world to use gene editing techniques in humans got underway in the USA, on HIV+ patients. The aim was to modify a particular gene, CCR5, which prevents the HIV virus from entering its target cells.

Holoclar, a product made in Italy, was approved as the first stem cell therapy to treat corneal injuries caused by burns. 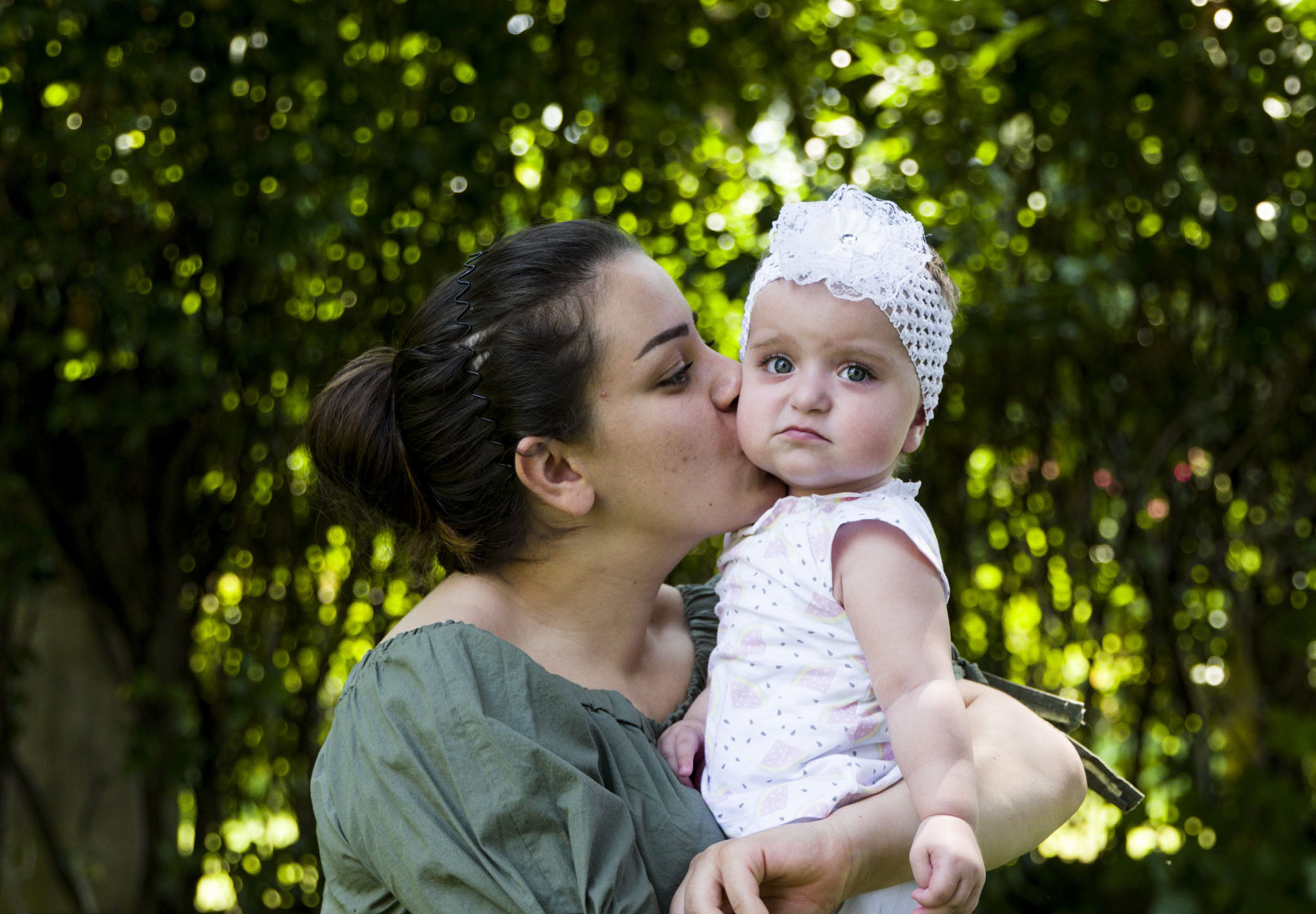 The go-ahead for Strimvelis in Europe

GlaxoSmithKline, Fondazione Telethon and the San Raffaele Research Hospital confirmed that the European Commission had given marketing authorisation for Strimvelis, the first ex vivo gene therapy with stem cells to treat patients with ADA-SCID. The photo shows Schana, the first little girl to receive gene therapy as an approved drug. 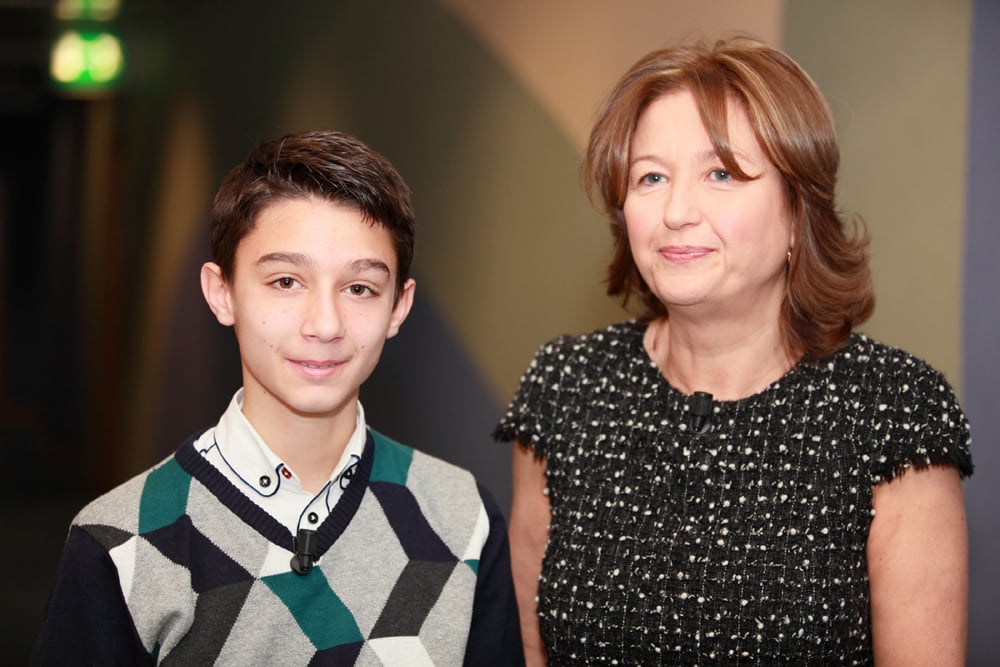 New gene therapies on the market, also for cancer treatment

Three important gene therapies were approved in the USA – Luxturna for Leber congenital amaurosis, which saw Tigem involved in the initial stages of the study (the photo shows Orlando, one of the Italian patients who took part in testing, along with Francesca Simonelli from the Second University of Naples). In the field of oncology it was the turn of Kymriah and Yescarta to fight two types of blood cancer in children and adults. The following year would see Europe approving all of the therapies. Thanks to gene editing, in the UK engineered T cells were used to successfully treat a little girl with leukaemia that wasn’t responding to other treatments. 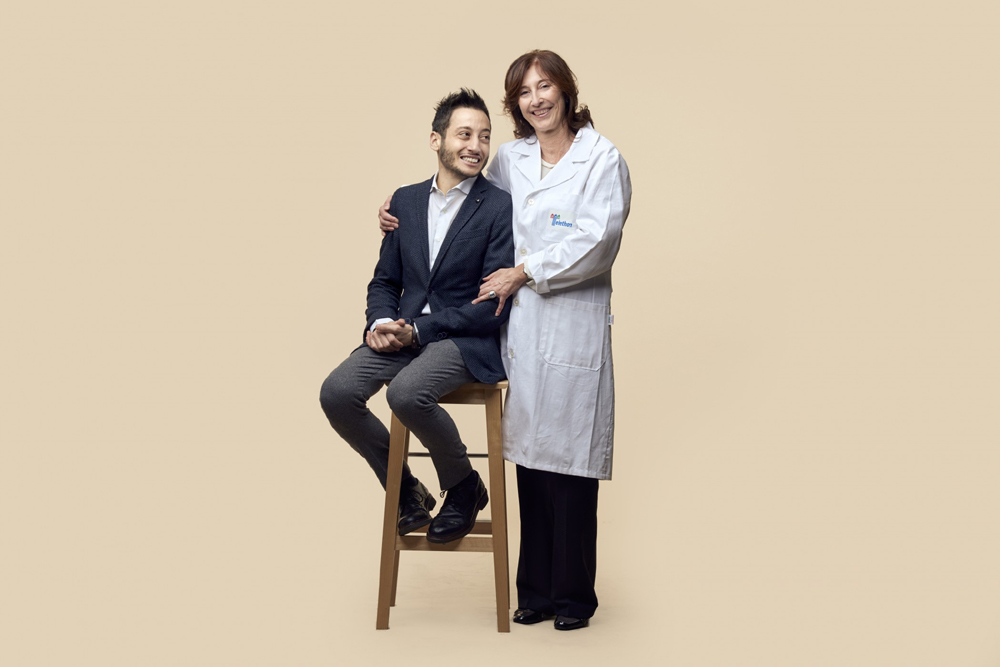 In Nature Medicine, Giuliana Ferrari and her team published the initial results of a gene therapy study by SR-Tiget on patients with beta thalassemia, a very serious inherited blood disorder. The treatment was shown to be able to reduce or even eliminate the need for blood transfusions.

In the meantime, a pilot project commenced in the regions of Lazio and Tuscany for newborn screening of SMA. Early diagnosis would maximise the effectiveness of new therapies, such as the drug Nusinersin, based on antisense oligonucleotides, and the gene therapy Zolgensma, approved in the USA in the same year.